Legendary grinch Steve Albini has provided an interesting – if unintentional- promotional vehicle for UK Techno mainstay Powell, who “experimented” with the producer’s voice on his latest single.

When asked for permission to release the song, which sampled a live recording from Albini’s post-punk ensemble Big Black, he responded:

I am absolutely the wrong audience for this kind of music. I’ve always detested mechanized dance music, its stupid simplicity, the clubs where it was played, the people who went to those clubs, the drugs they took, the shit they liked to talk about, the clothes they wore, the battles they fought amongst each other…

Basically all of it: 100 percent hated every scrap.

The electronic music I liked was radical and different, shit like the White Noise, Xenakis, Suicide, Kraftwerk, and the earliest stuff form Cabaret Voltaire, SPK and DAF. When that scene and those people got co-opted by dance/club music I felt like we’d lost a war. I detest club culture as deeply as I detest anything on earth.

While most sane people would consider this a refusal, the producer who famously insisted on not receiving royalties for the million-selling In Utero by Nirvana, instead concluded:

So I am against what you’re into, and an enemy of where you come from but I have no problem with what you’re doing…

In other words, you’re welcome to do whatever you like with whatever of mine you’ve gotten your hands on. Don’t care. Enjoy yourself.

Not content with Steve’s voice, Powell asked if he could use his words as well, to which Albini responded: “Still don’t care”: 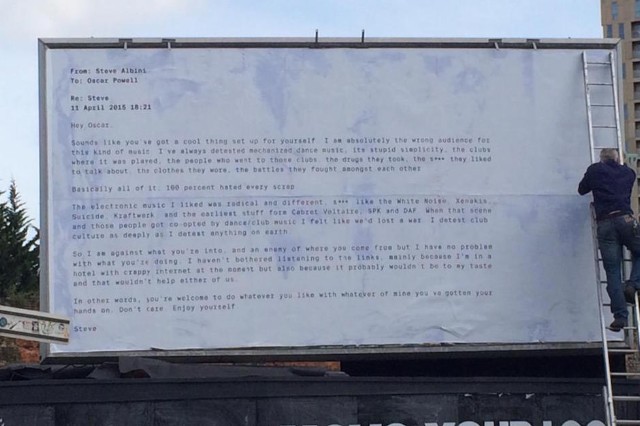 Insomniac, released by XL Recordings, is out now.

Did you find apk for android? You can find new Free Android Games and apps.

Want create site? Find Free WordPress Themes and plugins.Hoping to answer questions such as – do aliens like to ‘rock out’ or ‘get funky’? NASA launched the Voyager I and II into space in 1977. The probes set off into… END_OF_DOCUMENT_TOKEN_TO_BE_REPLACED

Want create site? Find Free WordPress Themes and plugins.No doubt a few people were grinning when pharmaceutical executive and notorious villain Martin Shkreli was recently arrested on charges of fraud, especially after being revealed as the buyer of the one-copy-only… END_OF_DOCUMENT_TOKEN_TO_BE_REPLACED